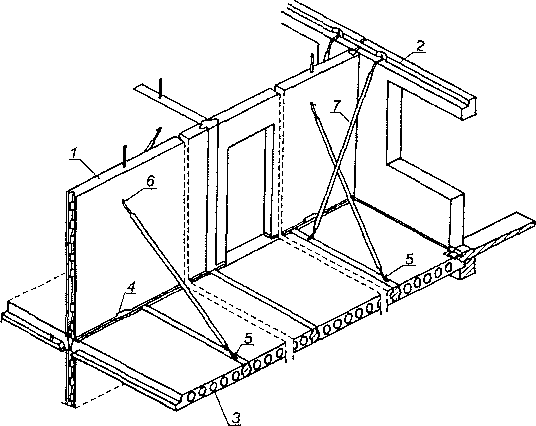 Basic structural elements of the W-70 system:
The multi-opening floor slabs were high 22 cm, they were made in width 120, 180, 240 cm and length 240, 360, 480 i 600 cm. The actual length of the plates was less by 2 cm, and the width of 1 cm from modular dimensions.
The boards were produced with cutouts along the longitudinal and transverse edges for better joining. In addition, depending on the purpose and location in the building, the boards were produced in the following variants: internal with cutouts on the edges, internal with cutouts for installation cables, corridor with cutouts on the edges, external with cutouts for installation cables, corridor, outermost ones with cut-outs for supporting external walls or attaching balcony slabs.
The inner wall panels were thick 15 cm and were produced in height 253 cm and length 120-600 cm, changing her what 60 cm. The variety of lengths made it possible to solve various functional systems. The boards were produced in variants without door openings and with openings.
In order to enable the correct connection of the walls, the plates were made with indented edges and with the actual length less than the modular one.
One group of plates was shortened by 10 cm, the other, Fr. 1 cm. Two screw rectification pins protruding from the upper edge of the slab were concreted in the slabs, used for proper wall mounting.

The outer walls were divided into: load bearing (peak), self-supporting and cover.
Prefabricated external walls were produced as large-size ones in the following material versions: multi-layered, from cellular concrete and expanded clay aggregates.
Load-bearing walls were made as multi-layer or expanded clay concrete walls. Multi-layer walls consisted of a reinforced concrete or concrete slab with a thickness of 15 cm and the insulation layers (polystyrene or mineral wool in thickness 6 cm) and a texture layer with a thickness 6 cm. The texture layer was hung on the support plate with steel hangers. The length of the prefabs was 120-300 cm and could change what 60 cm.
LECA load-bearing walls were single-layer with an external texture. Their length was 120-360 cm and it could vary from time to time 60 cm. Self-supporting walls are made of LECA as single-layer walls with a ready external and internal texture. The thickness of the walls was 36 cm, and the length 240, 360, 480 i 600 cm.
Curtain walls were made in 2 varieties: multi-layer and aerated concrete. The length of the prefabricated elements was equal to the spacing of the load-bearing walls: 240, 360, 480 i 600 cm.