Prefabricated reinforced concrete buildings.
The structure of prefabricated frame buildings is made of elements, whose shape, dimensions (length, width, thickness) and weight, define the production possibilities, transport and assembly. These elements are connected at the construction site by means of various types of rigid and articulated joints.

The most common load-bearing systems are:
a) framework regimes,
b) column-beam structures,
c) column and slab structures.

The building's spatial stiffness is ensured by the shafts, vertical walls and rails. In low-rise buildings, this stiffness can be provided by frames with rigid knots.

The position of the joints in the frame or column-beam system depends on the adopted static scheme. H-frames and portal frames shown in the figure are widely used in frame construction. These frames can be positioned on the building plan in the longitudinal or transverse direction.

Connections within H have been adopted in the area, where the smallest bending moments occur. The columns of the portal frames are connected with the columns of the lower storeys at the floor level, while the H-frame columns are halfway up. Frames are usually made one aisle wide.
In buildings with a width greater than one aisle, the frames are arranged alternately, i.e.. every second span, and connects them with an intermediate bolt. This bolt is usually articulated with the frames. If the aisle between the frames is small in width, then an intermediate bolt can be dispensed with, by making frames with brackets.
The ceilings rest on the frame transoms, which may be prefabricated reinforced concrete slabs or rib-and-slab ceilings.
The stiffness of the building in height 8-10 of storeys in the direction parallel to the plane of H frames can be provided by the frames themselves, while in the direction perpendicular to the frames, the building should be stiffened with additional walls or braces located in the axis of the columns. In buildings of small width and higher than 8 of the storey, there is also a need to use additional bracings in the plane of the frames in the form of steel lattice braces or shield walls . 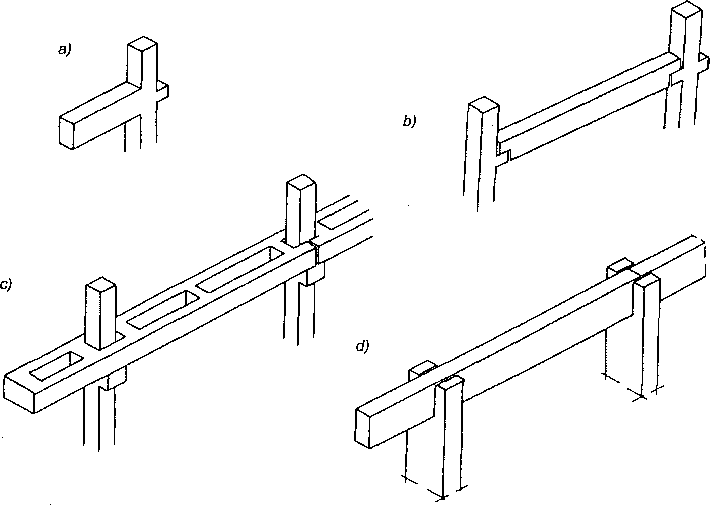 Mullion-transom structures (beam): a) sloop with a cantilever bolt, b), c),d) examples of bolts used.

In column-beam structures, the load-bearing structure consists of columns and (rygle) and floor slabs, which rest on the beams. The columns can be one or two storeys high and are connected along their length. The transoms can rest directly on the poles or on reinforced concrete or steel supports protruding from the poles. The figure shows several types of bolts and the methods of supporting them.