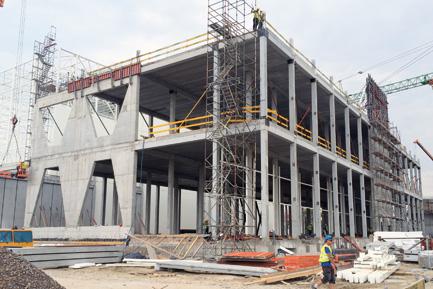 In last 40 In the years of the last century, many different systems of prefabricated housing and general construction were used in Poland. The load-bearing structures of these systems were prefabricated reinforced concrete elements, mainly produced in permanent production plants.
The most commonly used housing systems were: W-70, WK-70, OWT-67, OWT-75, WUF-T, Szczeciński, WWP, Domino.
In all systems, it was possible to implement one or two types of buildings industrially. Elements included in the building were manufactured in permanent plants and delivered to the construction site, and there they were assembled in teams.
All the problems related to the: designing, production, transport of elements and assembly of buildings. It was not possible to assemble buildings of another system from elements produced for one system. However, it was possible to partially use the elements of one system in the other.
In addition to system construction, structural systems have developed–assembly technologies: WITH (Żerańska), J (Jelonki), H (ram H) and other. In construction and assembly systems, all construction and assembly problems are solved, while installation problems, finishing, partition walls, external walls, equipment, etc.. are solved with great freedom.
Some elements of the systems and technologies mentioned are still produced and are used in general and residential construction. This mainly applies to floor slabs, exhaust and smoke ventilation blocks, beam staircases, etc..