Cross-section of the FF system hall with outbuildings.

If cranes with a lifting capacity of up to 3,2 t suspended from roof girders, then the spacing of poles in the longitudinal direction of the hall is 6,0 m. In the case of supported transport - overhead cranes 20 t running on crane beams based on columns - the spacing of the hall columns is 6,0 m or 12,0 m. Column grid 18,0 x 12,0 m is used in these halls, in which non-gantry transport is used.

The load-bearing structure in the transverse direction of the hall consists of formed frames ?c columns fixed in the foundation and girders articulated on them. In the longitudinal direction, the horizontal forces from the wind and cranes are absorbed by the braces placed in the plane of the external and inter-bay columns.

In the picture 7.30 basic construction elements with their markings are presented (symbols), from which halls in the FF system are made. The system includes:

b) SBSFF-90/18 prestressed concrete girder with five variants of reinforcement,

The structural system of the outbuildings is made of pillars or walls, on which they are

based reinforced concrete or prestressed beams, and on them a covering made of ceiling or roof panels. 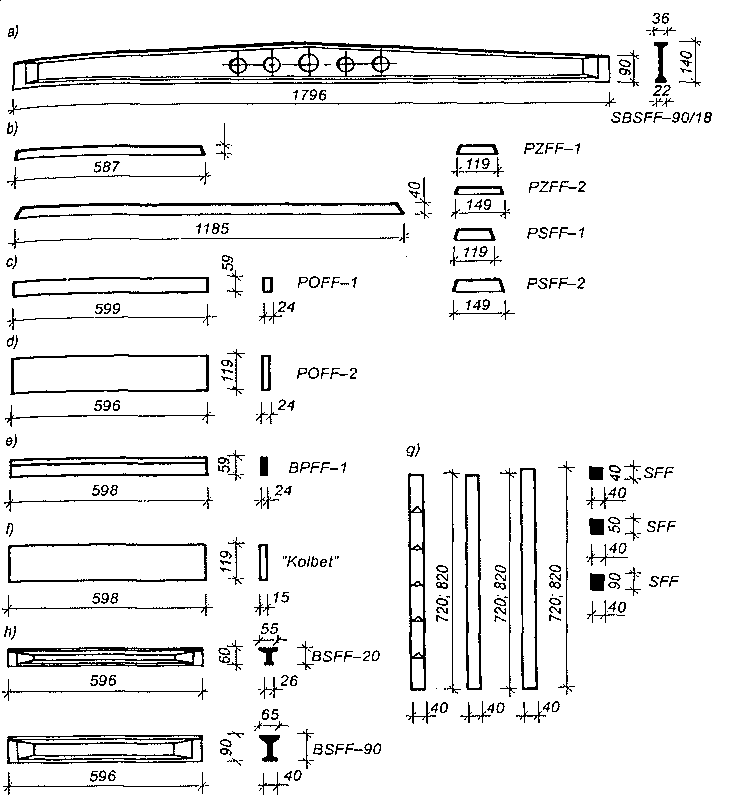 SBSFF-90/18 prestressed girders were produced in one length and in five variants of prestressing reinforcement. The drawings show the girder view and its cross-sections, before and after laying the roof panels on top of it. After the roof panels are placed on the girders, the spaces between the ribs of the panels are filled with concrete, which cooperates with the girder in transferring operational loads.