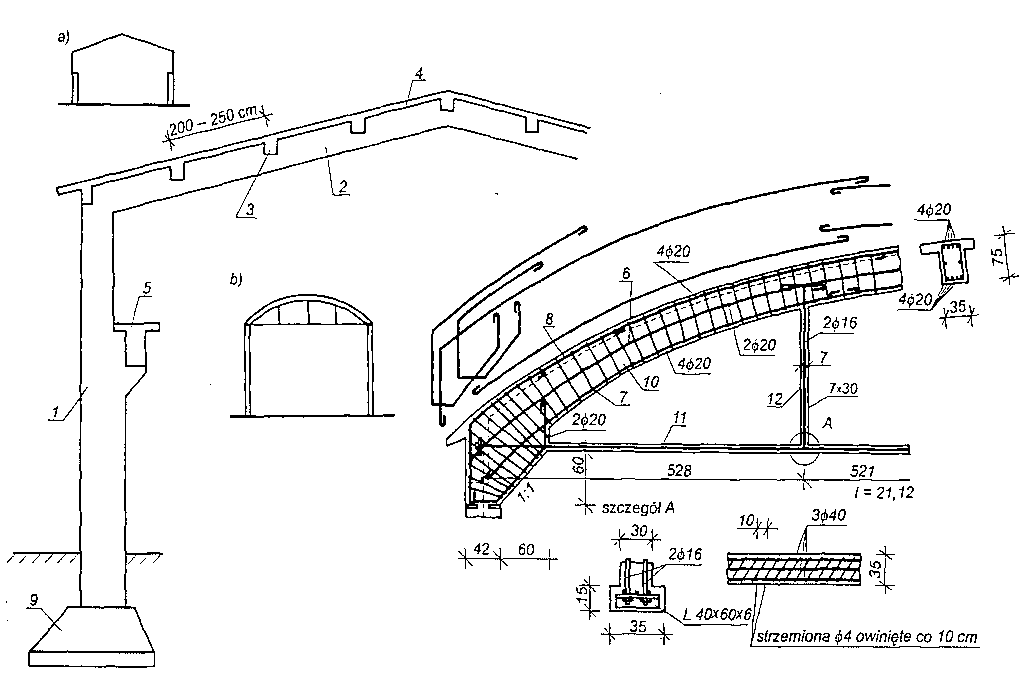 The figure shows the cross-sections of monolithic reinforced concrete halls with traditional load-bearing structures, which are performed less and less.

The load-bearing structure of these halls consists of:
a) foundations,
b) frames with straight transoms, kinked or curved,
c) roof plate supported on ribs,
d) crane beams.

Usually, the span of monolithic halls with framework structures does not exceed 20 m, and the spacing of posts in the longitudinal direction of the hall - 9 m. Larger spans, do ok. 100 m, achieved by using arched structures (expanding).

Frames with straight or broken bolts are spaced at intervals of approx. 6 m. The ribs rest on the transoms, spaced approx. 2,0-2,5 m, on which the thick roof plate rests 6-7 cm.

In the halls, in which crane transport is used (propped up) Most often poles have a variable cross-section in height. Because high vertical forces act on the column from the crane rails, therefore the beam rests directly on the column, to reduce the eccentric effect of force. For light cranes, the crane beams rest on a cantilever protruding from the column.

Just like straight or bent bolts, also the curved transoms can be connected to the mullion with a rigid knot. The figure shows the structure of the frame, in which the bolt (arc) it is articulated with the pole, and expansion force (stretching) takes over the steel tie, which is suspended from the arch, so that it does not sag.

Instead of frames with curved transoms, which transfer the load from the roof, ceramic-reinforced concrete and reinforced concrete arches with ties spaced approx. 3,0 m. The span of such vaults sometimes exceeds 20 m. The arrow of the arc is 1/8 to 1/5 of the span length.

The thickness of the reinforced concrete vaults in the keystone is 6-12 cm, while at the headboards 12-25 cm. Reinforcement of bars with a diameter 6-10 mm is placed in the central part on one side, two-sided at the headboards. In the longitudinal direction, diameter-dividing and antispasmodic bars are used 6 mm. This type of vault is then used, when the cover is influenced by continuous loads, uniform or small symmetrical concentrated forces.

Thin-walled covers have a small thickness measured perpendicular to their surface compared to their length, width and height. These structures can have a shape:

The most common single curvature coatings are translational coatings, which are created by the parallel shift of the curve (making up) along a straight line. An example of this is circular cylindrical shells, ellipses, parabola etc..

In order to increase the stiffness of the shell with a larger span, full transverse diaphragms or in the form of ribs protruding from above or below. The diaphragm spacing is 6-12 m.