The framework structures include ceilings and poles. Due to the method of making the ceilings and their connections with poles, one can distinguish:
a) mullion and transom structures (frames with rigid knots),
b) column and slab structures (hidden frame bolt - beamless),
c) column-beam structures (Beams are more often articulated with columns than rigidly).

The spacing of poles in skeletal structures depends on many factors, like for example. the purpose of the building (utility function), the type of ceilings used, architectural form, etc.. In frame structures, the spacing of columns in the longitudinal direction of the building is usually the same, while in the transverse direction the spacing may be varied. The outermost rows of columns can be placed in the face of the external wall or moved away from the face to the inside of the building, and then the transoms or floor slabs are with supports.
Three-nave or four-nave buildings with the same span of naves are usually wider than two-nave buildings and are used for warehouses, production halls, department stores etc..
A three-nave structural system is most often used in office and residential buildings; the aisles have a wider span than the central aisle. Columns are often offset from the face of the wall. In these buildings, external walls are usually of a lightweight type. 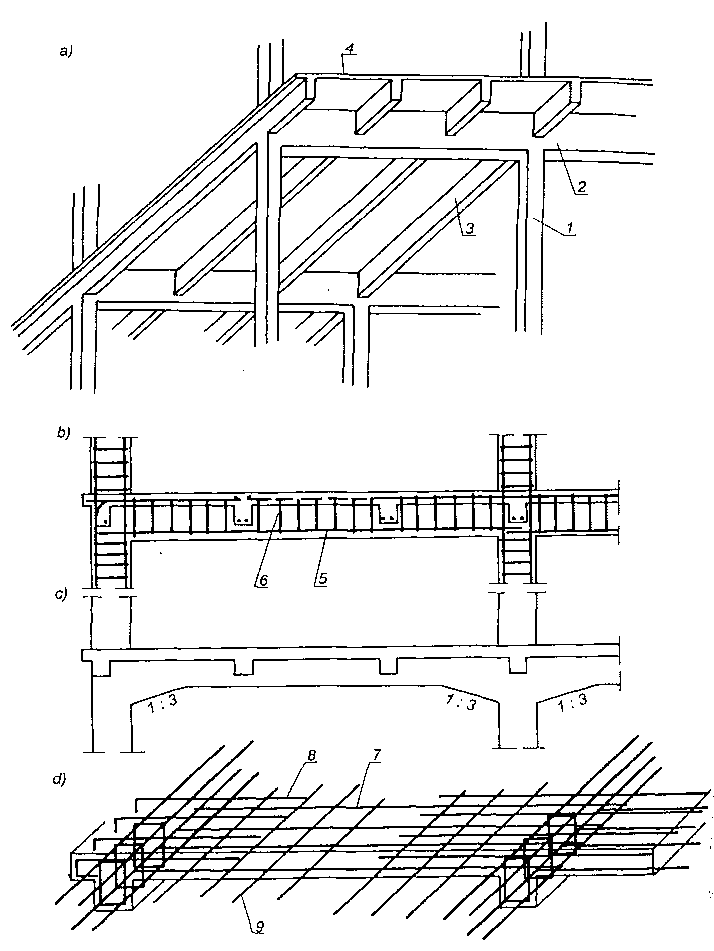 The figure shows the mullion-transom structure. The posts and transoms are connected with rigid nodes and form a frame. The bolt may have a constant section along its length or a variable section (Lynx. b, c). Slants with a slope 1:3 they increase the cross-section of the transom at the supports, because in this area the greatest shear forces and moments occur. The slab-rib ceiling rests on the frame transoms. The board thickness is assumed in the range from 5 do 10 cm, depending on load and rib spacing, and the height of the ribs from 1/15 do 1/20 their span. For heavy loads above 5 kN/m2, for example in warehouses, smaller rib spacing is assumed than in residential or office spaces. The span of the frame transoms is assumed 6,0-12,0 m.