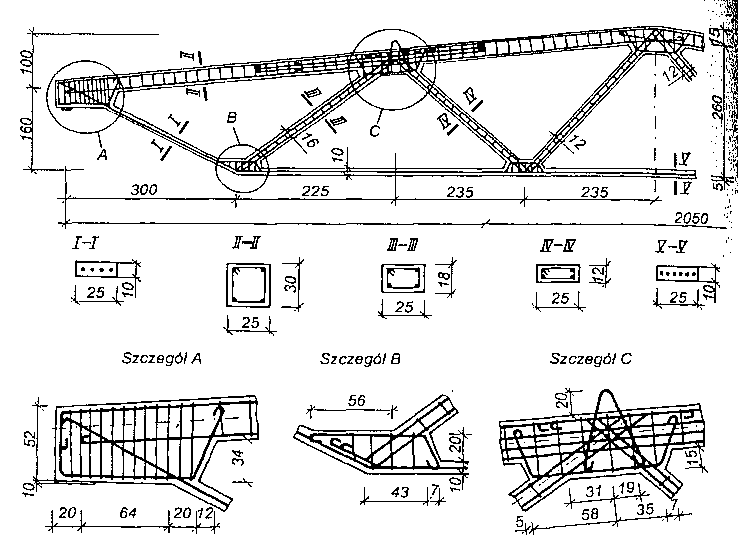 Reinforced concrete trusses and component segments are made in a horizontal position (horizontal), therefore, the cross-sections of the stripes, posts and ties are usually square or rectangular in shape. The figure shows the reinforcement of a single-segment reinforced concrete girder. An important issue is the correct connection of the reinforcement and its anchoring in the nodes.

Roof panels are placed on the strips of the upper trusses. In some roof solutions, the panels are connected with concrete and with a belt. For a better connection (monopoly) of the slabs with the spar, the stirrups are released from the spar chord.
Trusses with larger spans are supported on columns or walls by means of bearings, which are most often steel sheets of thickness 6-10 mm.
Similar to lattice trusses, there are also many varieties of beam girders. Constant height girders are used to cover the halls, with slopes or arched. The slopes of the roof slope when using girders of a constant height are obtained by using columns of different heights.

The stiffness of the columns may not be sufficient to ensure the longitudinal stability of the hall, especially then, when the span of the hall and its height are large. In this case, the outer longitudinal walls can be included in the cooperation with the columns, if they are not lightweight walls of the shield type. In the case of halls with light walls (shields) stiffening in the longitudinal direction can be provided by the use of braces placed in the extreme fields. 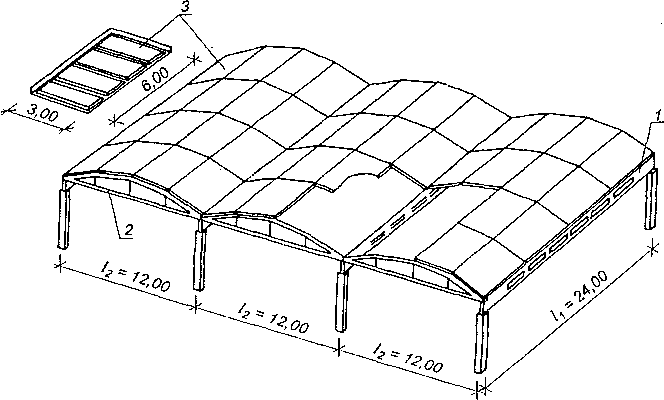 One can also make single shell roofs from prefabricated elements- and two-curvature. The figure shows a single-curved cylindrical shell. The spacing of the diaphragms is the length (span) coatings, while the spacing of the edge beams (headboards) l2 – coating width. The shell is made of prefabricated panels with dimensions 300 x 600 cm captive at the construction site.